The Tradesman. That was the official – and informal – title of Lars Larsen, who in 1979 established the company today known as JYSK.

From the very beginning, great tradesmanship and great offers were the foundation of Lars Larsen’s work. Great tradesmanship is also the reason for the success and expansion of JYSK, which has become an international retail chain with an associated online business.

In Denmark, Lars Larsen was one of the country’s best-known and most industrious businessmen. Not least because he starred in national TV commercials from the very beginning of JYSK, and he was known for always having a great offer.

In addition to JYSK, the family behind Lars Larsen Group owns a number of other companies within different lines of business, including interior decorating, restaurants and golfing.

In 2004, Lars Larsen published his autobiography, which offers much more about his life and his career. When the book was published, all Danish households received a copy, and the book has since been translated to a number of languages.

Lars Larsen passed away in his home in Silkeborg, Denmark, in August 2019 with his closest family by his side.

You can read Lars Larsen's autobiography from 2004 here. 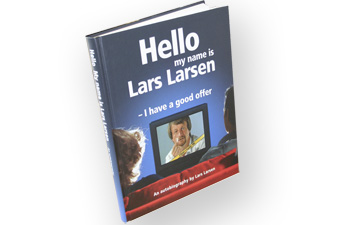