By Appointment to The Royal Danish Court

When Her Majesty Queen Margrethe II of Denmark on her 70th birthday, on April 16th 2010, appointed JYSK as Official Supplier of the Royal Danish Court, it became one of the greatest days in JYSK’s history.

Over the years, JYSK owner Lars Larsen and JYSK have received numerous official visits from the Danish Royal Family.

The Queen visits JYSK in Germany

In 2019 , the Queen paid a visit to JYSK's regional head office in Handewitt, as part of Her Majesty's official visit to South Schleswig. Knight 1st Class of the Order of Dannebrog

In 2017, Lars Larsen is decorated as Knight 1st Class of the Order of Dannebrog. 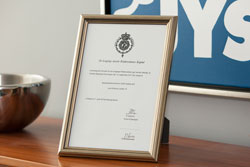 Congratulations to Her Majesty

In April 2015, Her Majesty the Queen of Denmark celebrated her 75th birthday. It was an occasion that was naturally celebrated in the proper manner: Lars Larsen and his wife were amoung the select group given the opportunity to say congratulations to Her Majesty at a grand birthday arrangement in Aarhus, Denmark. In September 2014, the royal couple visited Lars Larsen at Himmerland Golf & Spa Resort in conjunction with their annual summer cruise. Since 2008, JYSK has worked with Save the Children's Nordic division to create a better future for children and young people in Bangladesh through the Work2Learn project. In 2012, Denmark's Crown Prince Frederik visited Work2Learn in Bangladesh's capital city of Dhaka. By Appointment to The Royal Danish Court

In 2010, Her Majesty the Queen has given permission to JYSK that we may use the designation By Appointment to The Royal Danish Court, a title only granted to companies or individuals who have supplied The Royal Danish Court for several years, are well-established, financially sound and have an excellent reputation.

Knight of the Order of Dannebrog

In 2009, Lars Larsen is decorated as Knight of the Order of Dannebrog for his outstanding contribution to the Danish business community. In 2008, Her Majesty the Queen of Denmark visits JYSK's new warehouse in Uldum near Horsens as part of the royal couple's summer cruise. Lars Larsen presents the Queen with two exclusive eiderdown duvets and a copy of his autobiography after which Lars Larsen visits the Royal Yacht Dannebrog accompanied by his wife. In 2007, on behalf of JYSK and its large number of employees, Lars Larsen receives King Frederik IX's Honorary Award, which is presented in recognition of a valuable contribution to Danish export.